Transition from Analog to Digital: One State’s Story

In 2009, the National Library Service for the Blind and Physically Handicapped (NLSBPH) initiated a $75 million nationwide transition from analog to digital recorded talking books. The audio cassette talking book format, which was introduced in the late 1970’s, served as the longtime workhorse for delivering millions of talking books to over 700,000 readers nationwide unable to read standard printed materials. The transition planned to replace the obsolete audio cassette technology with USB flash drive technology, and would mean the replacement of millions of books and thousands of cassette players all across the United States. This article summarizes the efforts of the Wolfner Library of Missouri to bring about that change.

As one of the first libraries in the country to supplant the audio cassette as the predominant format in the state with the new talking book on digital cartridge, planning for the transition began well in advance of the nationwide roll-out. Wolfner Library had been selected in 2007, out of 57 regional libraries in the NLS network, to be one of the prelaunch libraries and the staff was excited to play an integral role in this historic event. During the course of the year prior to the digital transition, the Wolfner Library staff met on a weekly basis to plan for a smooth transition for library patrons. Because of this demonstrated staff commitment and focus, the exchange of a format used for over 30 years took place in less than one year.

In 2009, Wolfner library circulated 428,000 items to 9,119 active individual Missourians and 1,998 institutions. These institutions included schools, nursing homes and other care organizations, of which 319 of the individual readers were youth. Materials circulated by the library included Braille, cassette and digital books, magazines, large print books, descriptive videos and DVDs, and catalogs. In addition, staff received over 21,000 inquiries by phone, letter, e-mail, and patron visits.

Eight prelaunch libraries were selected to be the first to participate in the digital transition. The prelaunch would test digital books, digital players and the USPS distribution of materials. A sampler of newly created digital books on USB cartridge arrived first. The sampler consisted of 54 titles and each prelaunch library was given 37 copies of each titles. NLS next sent out 500 of the long awaited digital players in early May of 2009. Wolfner Library staff distributed its 500 allotted machines to Missourians in three days. Wolfner’s circulation staff then matched the speed and efficiency of the machine department’s work ethic by adding 37 copies of the 54 sampler digital books into the automated circulation system in record time. With books and players in the mail, Missourians were some of the first readers in the nation to experience listening to NLS digital books on digital players.

Early in the prelaunch, it became obvious to Wolfner staff that 54 titles would not satisfy our patrons’ thirst for reading materials. Fortunately, with the financial support of the Friends of Wolfner Library, 5,000 blank cartridges were acquired to supplement the sparse digital USB cartridge collection supplied by NLS. The library’s duplication department took advantage of more than 15,000 titles available online via the NLS Braille and Audio Reading Download (BARD) website, and easily filled the blank cartridges with some of the most popular books on the BARD site.

To educate patrons about the titles available in the new format, the staff created numerous digital bibliographies to distribute with the new players, providing patrons with an instant list of selections from which to choose. The library shared these bibliographies with other network libraries, many of which were faced with staffing and funding shortages.

With a limited number of titles/copies of digital books and an increasing number of readers with digital players, the circulation of the digital collection has reached over 90% and this high circulation rate continues to grow. In July 2010 alone, of the 31,517 titles in Missouri’s digital collection, 94% of them are in readers’ hands!

Full implementation of the transition for the 56 regional and 65 subregional libraries making up the NLS network of libraries for the Blind and Physically Handicapped began in fall of 2009. The only guidelines for distribution of digital players was that veterans, by law, were given priority with a recommendation that the over 4,000 centenarians be given preference. Many libraries had the same experience as the prelaunch libraries: patrons anxious for the new player and a shortage of new digital books.

Wolfner Library, because of the hard work and dedication of staff and some fortuitous circumstances, reached the halfway milestone of the transition earlier than any other library in the network. By May, 2010, the statistics showed that the digital format became dominant; this in spite of the fact the collection consisted of 2,700 digital titles compared to 56,600 cassette titles. The statistics for May shows a circulation of 13,751 (42%) cassette books and 19,063 (58%) digital books. The chart included shows the progression of cassette and digital talking book circulation for Wolfner Library for this federal fiscal year. 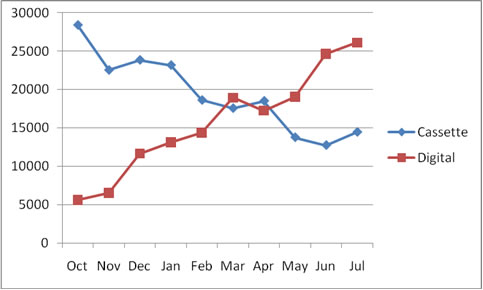 Feedback from from patrons who have received the new digital player has been overwhelmingly positive:

“I’m so happy with my digital book player. The DB cartridges are wonderful. I can’t even tell you how much easier they are for me to use.”

“At this point, all is working fine on my machine and I’m sure having a fantastic time with reading, using it. I think the tone is fantastic and love that it can be adjusted for each narrator’s voice. Also, being a computer user, I appreciate that I can compress the speech and while it’s much faster, it’s not chipmunk-like.”

“Whoever designed the machine was very aware of patrons’ needs.”

“… [She] loves the new digital machine and that it makes listening to audio books a lot easier now that she does not have to flip the cassettes over. She is paralyzed on one side of her body and it was always kind of a hassle to change the tapes.”

Through hard work and preparation, Wolfner Library was able to be in the forefront of distributing the new digital readers and books to our patrons in Missouri. While it has been a challenging year for everyone involved, it is also a very exciting time to be part of the NLS network, and most of all, an exciting time to be a reader in the NLS program! This is a nationwide effort to upgrade access to information of those unable to read standard printed materials. Find out more about this program in your area by going to the NLS web site at:
http://www.loc.gov/nls/find.html. For more information about Wolfner Library, you can find us on Facebook, online at http://www.sos.mo.gov/wolfner, or for greater detail about the successful transition, you can contact Wolfner Library Director Richard Smith at richard.smith@sos.mo.gov.