Librarians in Scotland: My Journey with ASCLA 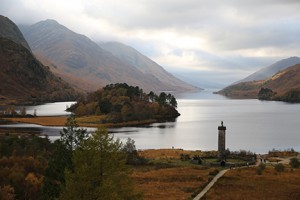 Scotland is a magical place. Its steep hills, pristine lochs, and low-hanging mists are nothing short of stunning. Its sense of cultural and historical memory reaches farther back than many Americans are accustomed to thinking about. On just one stop in Glenfinnan, I could look out in one direction at the Glenfinnan Viaduct, the real-life railway viaduct over which the Hogwarts Express passes in the Harry Potter films. When I turned and looked out in the other direction, I could take in Loch Shiel, flanked by looming, rocky hills. It was here that Bonnie Prince Charlie raised his royal standard in 1745, and summoned the clans who supported him to begin the Jacobite Rising.

This past October, I joined ASCLA on its seven-day tour of Scotland. The ASCLA group traveled between cities and sites by private coach, with two of the most knowledgeable, organized, insightful tour guides I have ever encountered. My typical instinct is to explore new places independently, so at first I wondered whether being shuttled around by coach would feel restrictive or touristy. To my delight, the ASCLA Scotland trip was the perfect balance of not having to worry about the travel details and the freedom to explore beautiful and historically significant sites. With ASCLA, I toured the eccentrically decorated mansion of Sir Walter Scott, cruised across Loch Ness on a boat, toured a whisky distillery, and climbed all 246 steps of the William Wallace Monument overlooking Stirling. Yet we weren’t tied down to the large group 24/7; my friends and I still found time for a literary pub crawl in Edinburgh, late-night karaoke in Inverness, and traditional Scottish session music at a pub in Glasgow. 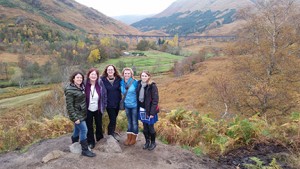 I signed up for the trip as a solo traveler, having never met anyone else who was going. The tour operator was able to pair up solo travelers upon request though, allowing us to save a little money on hotel rooms if we wished. My roommate and I hit it off right away. Though I arrived knowing nobody, I left at the end with a group of good friends. Actually, more than just good friends — good friends who understand “library life.” In an ordinary tour group, you’re not just going to find other travelers as excited as you are to pick out children’s books featuring “heilen coos” (Highland cows) and the Loch Ness monster — all in preparation for planning Scottish Highland Storytime back at your respective libraries. I also had the opportunity to learn about work in library & information settings different from my own. The trip provided an occasion for networking, all while taking in gorgeous scenery, exploring ancient castles, dining on the local cuisine, and never having to be concerned about travel logistics. Though my new library-friends are scattered across the United States, I am already excited to know that when I attend national conferences solo in the future, I will be able to catch up with my travel companions from ASCLA’s Scotland trip.

Previous postLooking for Innovation and Empowerment? Go to your local Library Next postA Report from the Grand Literary Tour of Scotland