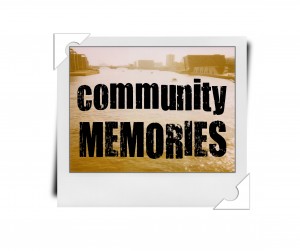 Public libraries expend a lot of time and resources seeking answers to the question �How can we be relevant to the people we serve?� One of the answers is simple and something that librarians do well. We talk to our neighbors! Through the Community Memories project, librarians at the Virginia Beach Public Library are doing just that. They are talking to their neighbors and building community by remembering the past.

The City of Virginia Beach has a long history. Members of the Virginia Company landed here at Cape Henry on April 26, 1607. But the region remained rural with small villages till the 1960s. Since then, Virginia Beach has grown to be the largest city in Virginia with a diverse population that mostly came from elsewhere. The public library has preserved local history by collecting oral histories, artifacts and digital images through gifts and donations. Creating a record of the past through projects such as Community Memories is a new venture.

Locally, the Virginia Beach Public Library serves as the lead government organization in celebrating African American History Month. Several years ago a member of that planning team, Korene Wilbanks, proposed that we begin to celebrate and preserve the reminiscences of the aging members of our old neighborhoods. Her research revealed that Virginia Beach, formerly Princess Anne County, had no African American newspaper. This meant that several communities in Virginia Beach had little recorded history from the time of the Civil War to the late Civil Rights era when more newspapers began to report on events in the African American community.

Korene pointed out that we did yet have some small window of time to collect history from our senior citizens about the history of the 20th Century in our community. Korene says, �As a historian, I knew the precedents of history collection of accounts of former slaves from the 19th Century and the recent history collection projects such as Veterans History Project of the American Folklife Center of the Library of Congress. I knew this type of project could and should be replicated for the African American communities in Virginia Beach whose history had gone under recorded.�

The library�s acquisition and cataloging departments created forms and procedures to make sure that we captured all the information needed to make our recordings permanently accessible. Cynthia Hart, the Virtual Librarian, arranged for videotaping and edited the reminiscences for DVD and Internet. Previously collected oral histories from neighbors in the rural part of the city will be added to the Community Memories in the near future.�

The Community Memories project forges a shared understanding of how unique neighbors and neighborhoods contribute to the city�s collective past and its future.�The library provides a venue for conversations between neighbors. As Korene observed, the collection day in the community of Seatack was a beautiful moment for a historian that comprehends that a diary, a newspaper article or a faded photograph are things that create our nation�s historical heritage.

Residents from two African American neighborhoods, Seatack and Burton Station, have now contributed oral histories, photographs and artifacts to the Community Memories project through events during annual African American History Month celebrations at the library. We are now planning for a third neighborhood celebration and intend to work with all the varied historic communities in Virginia Beach.

The entire sharing session from the 2008 Seatack event is cataloged and available in DVD format for check out from the library. One account, available online via eStream, is of the origins of the Seatack Fire Department. The story is told by a long time resident, Mr. Grimstead. He relates how the men and women of Seatack organized, trained and triumphed over near disaster and in the process created a community fire station.

The Library is processing the oral history collected at the February 2009 event for Burton Station community residents. Their story is a guidepost to a better future.�The Burton Station community is believed to date back to a gift of land to freed slaves. But proximity to the airport increased the value of the land and led to the dispersal of the community. Now on the verge of redevelopment, neighbors and former neighbors came together to celebrate their past and to remind us all of values more important than money.

Talk to your neighbors!�Put your library at the heart of your communities� conversations.�And don�t be afraid to hear the sad with the good�that�s how communities learn.