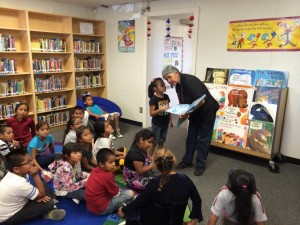 Jean Whitehorse of the Crownpoint Outreach Center delivers storytime to kids as part of summer reading.

The New Mexico State Library serves and supports 18 tribal libraries in New Mexico through its Tribal Libraries Program (TLP). For almost 20 years, the TLP has been providing continuing educational opportunities, funding, leadership, and consulting services to library directors and staff that serve the indigenous Pueblo & Apache tribes of New Mexico.

Founded in 1997, The TLP originally set out to help libraries develop. Now with 18 libraries statewide, the TLP finds itself in the Library Development Services Bureau, as it provides much of the same services as other state library consultants, but with a more dedicated understanding of the unique culture of the tribal communities. Working closely with the Native American Libraries Special Interest Group, a sub-group of the New Mexico Library Association, the TLP’s mission is to strengthen and bring together the tribal libraries around this beautiful state.

“Tribal libraries do all the great things traditional libraries do,” reports Alana McGrattan, TLP coordinator. “In addition, they often play a more active and involved role in the cultural and language preservation for their communities.”  For example, at the San Felipe Community Library, the library director Shannon Townsend leads storytimes for children in Keres, the traditional language of the San Felipe Pueblo. In Santo Domingo, library director Cynthia Aguilar partners closely with the Head Start program, and does weekly outreach, supporting early literacy for her community. Partnerships in education are strong for the tribal libraries, as many fall under their communities’ education departments. At Laguna Pueblo, the library is building a digital archive organizing language material, pueblo history and photographs.

The compact, tight-knit group of the tribal libraries serves as a success model of strength when libraries come together to deliver a unified message to community leaders. In 2014 and 2015, the TLP coordinated the Leadership Institute for NM’s tribal library directors and members of tribal leadership. The program brought together community speakers and innovative thinkers, who delivered presentations on topics such as legislative funding approaches, indigenous community planning and power-mapping.

“Creating a dialog at the Leadership Institute really helps all get on the same page,” reports Santo Domingo Library Director Cynthia Aguilar. “Also, we were able to highlight all the things we do and can do to support our communities.”

Beyond leadership, the TLP delivers direct service to the Navajo Nation through its extension service, the Crownpoint Outreach Center. There, Jean Whitehorse delivers library outreach services to the 50 Eastern Navajo Chapter houses, bringing programs in the Navajo language. Among her programs are financial & digital literacy training to seniors and storytime to kids. In 2015, Jean was recognized by the Mountain Plains Library Association with the “Unsung Hero” Award. 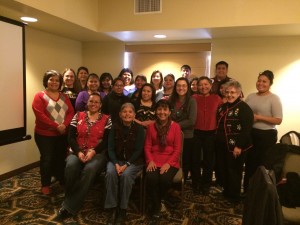 3. The members of the Native American Libraries Special Interest Group of the New Mexico Library Association

Like the tribal libraries themselves, the TLP finds success in collaborative projects. In summer 2015, TLP partnered with the Museum of Indian Arts and Culture (MIAC) to put a Native American perspective on “Every Hero Has a Story,” the summer reading theme that year. Using NM tribal heroes, MIAC organized art workshops for children and teens, where illustrators were able to teach the kids how to draw their own superheroes. MIAC transported kids to Santa Fe from the tribal libraries for the workshops; for those communities unable to come in person, an online video tutorial helped reach them remotely.

“The kids were so excited by the program!” says McGrattan. “It was such a success, and plans for summer 2016 are already in the works.”