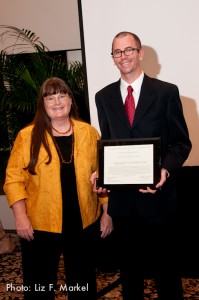 The Riverview Room of the historic Hotel Monteleone in the French Quarter provided a lovely setting for the 2011 ASCLA Awards Ceremony during the 2011 ALA Annual Conference in New Orleans.  An overflow crowd of 120 gathered at the ASCLA/COLSA Reception for tasty desserts and to recognize the achievements of ASCLA Award winners.

The big hit of the evening was the short video of the award winners compiled by ASCLA President Diana Reese. To see the video clip of each award winner, visit the ASCLA Awards Page: http://www.ala.org/ala/mgrps/divs/ascla/asclaawards/default.cfm

President Reese heartily congratulated each of the 2011 ASCLA Award winners, including: 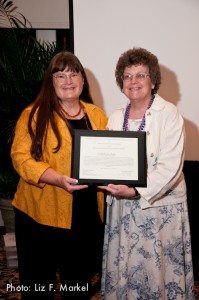 Queens (New York) Library Mail-A-Book Program with Interactive Programming – ASCLA/KLAS/NOD Award.  Presenting the $1,000 award and citation were award sponsors Dave Holloman, President of Keystone Systems and Kay Holloman who is CEO.   Accepting on behalf of the Queens Library were Chief Executive Officer Thomas Galante and Library Manager and Mail-A-Book Coordinator Madlyn Schneider. [See the article on this project later in this issue of Interface.]

Diane Walden – Colorado State Library – ASCLA Leadership and Professional Achievement Award.  Diana Reese congratulated Ms. Walden on this well-deserved recognition for her exemplary statewide leadership with correctional facility services and programs in Colorado and Florida. Reese noted that Diane’s leadership in the creation of the new ALA policy Prisoners’ Right-to-Read Statement: An Interpretation of the Library Bill of Rights is a clear example of both professional leadership and pioneering activity. 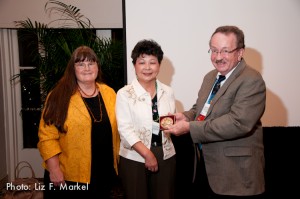 In addition, President Reese announced Samantha Lee Wickman of Somerville Massachusetts as the 2011 recipient of the ASCLA/LSSPS Century Scholarship of $2,500.  Ms. Wickman is a graduate student at Simmons College, Massachusetts.  On behalf of Barbara Mates, Century Scholarship Committee chairperson, President Reese extended appreciation for the immediate and generous response of ASCLA members and ALA staff to the S.O.S. call for donations in support of the scholarship fund earlier this Spring. 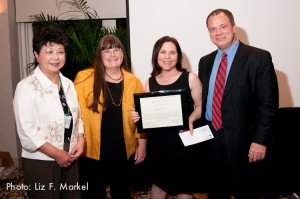 President Reese closed the awards ceremony by thanking the dedicated members of the ASCLA Awards Committee, the ASCLA/LSSPS Joseph F. Campbell Award Committee, the ASCLA/LSSPS Century Scholarship Committee, ASCLA Executive Director Susan Hornung and in particular ASCLA Marketing Director Liz Markel for their excellent work in promoting ASCLA awards and the Century Scholarship and in selecting such deserving recipients.   She also encouraged attendees to consider nominating a colleague or a library organization for a 2012 ASCLA Award.

Nomination forms are now available on the ASCLA website at:   http://www.ala.org/ala/mgrps/divs/ascla/asclaawards/default.cfm.  Nominations are due to the ASCLA Office by December 15, 2011. 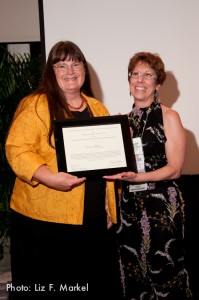