A Report from the Grand Literary Tour of Scotland 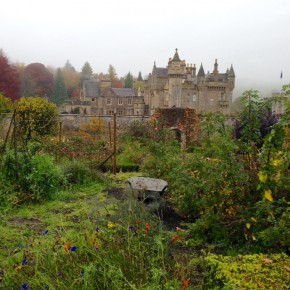 Text and images by Joan Elmouchi

It does get sunny in Scotland in November!  Sunny and not even particularly cold (we won’t mention the fog), replete with gorgeous fall colors, sparkling lakes
and rolling green hills. 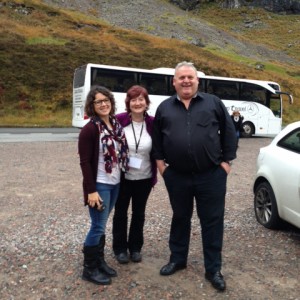 ASCLA held their Grand Literary Tour of Scotland from October 28 through November 5, and it was a memorable experience. Our Irish hosts, bus driver and guide Damien McKenna and Tour Host Veronica Dunne were outstanding.  Damien somehow kept all those Scottish kings, battles, and lakes in order and narrated our tour in his lovely Irish lilt. Veronica was a patient mother hen, distributing tickets, getting us to the right place at the right time, and dealing with any mishaps that might have occurred.

Tour participants came from all over the country, from Seattle to Boston, Michigan to Florida.  Active librarians, retirees and library vendors of all stripes were represented.

The tour overnighted in four cities – Edinburgh, Inverness, Oban, and Glasgow.  Our hotels in the large cities of Edinburgh and Glasgow were luxurious.  The village hotels in Inverness and Oban fell somewhere between charming and barely-room-to-turn-around.  We quickly learned that the Scottish love rich food, loaded with cream, butter, and mayonnaise.  Fabulous homemade soups were served with almost every meal, the breakfast buffets were generous, and a few brave souls among us risked sampling the haggis. 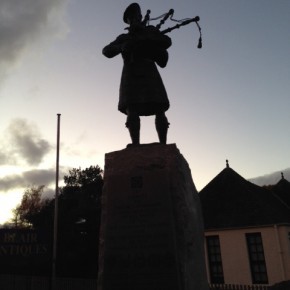 Statue at The House of Bruar on the way to Inverness

Literary sites were interspersed with the general sightseeing, and included a literary pub crawl in Edinburgh, Sir Walter Scott’s amazing home, Abbotsford,  Rosslyn Chapel (the final clue in The DaVinci Code), and the Beatrix Potter Garden in charming Dunkeld.  Other outstanding stops included a tour of the Oban Whiskey Distillery,  New Lanark – a World Heritage Site, The William Wallace (Braveheart) Monument, Stirling Castle, and the Colloden Battlefield, site of the 1846 battle between Bonnie Prince Charlie’s highlanders and British loyalists.  Everybody loved photographing the “heiland coos”, or long-haired highland cows that are unique to Scotland.

Of course there was time for shopping, for shortbread and lovely Scottish woolens to bring back home as a reminder of a wonderful trip

Previous postLibrarians in Scotland: My Journey with ASCLA Next postAdaptive Gaming:  Leveling the Playing Field